On Earth day, April 22nd, something truly remarkable has happened. Leaders and representatives from countries across the globe gathered in New York to sign the Paris agreement. The Paris agreement has set the goal to limit global warming to well below 2ºC.

This has been an extraordinary event for many reasons. One of them is the level of cooperation between nations. There are 195 recognized countries in the world. How many of them have already signed the Paris agreement, do you think?

Continue when you have a figure in mind.

The correct answer is 175. Very well done if you said something in that range. Never before this many nations have been willing to cooperate! By comparison, the human rights agreement was signed by 158 countries in 2006. The record for most signatures in one day dates back to 1982, when 119 countries signed the Law of the Sea.

This shows that world leaders are united in fighting a common enemy which is global warming. Big powers have joined forces: Russia, China, the USA and the EU on the same side.

Perhaps this is the closest we have ever come to world peace in the history of mankind.

If you got excited by this news and you want to do a little dance – be my guest.

Read on to learn more about why we are living in the most peaceful times ever, and what the next steps are now that the Paris agreement has been signed.

Next week is going to be the last update for the first series on YWU. In that update, I will try to connect the dots and show how everything is connected. Moreover I will provide 5 steps on how you can save the world.

So, sceptics may be rightfully asking, what is the value of signing the Paris agreement, considering that previous agreements have not been successful?

First of all, signing is mostly symbolism. But symbolism should not be underestimated in times like these: when investors, companies, NGOs and others are awaiting political leadership. The time of pointing the finger at bigger, more polluting countries is over. By signing this agreement, leaders have acknowledged that we are in this together and that each of us should do their fair share.

Unlike previous climate agreements, this agreement will probably become legally binding. At the moment it is not. After signing, the second step will be to ratify the agreement. Only after ratification, the Paris agreement will become legally binding. All countries have up to one year to decide whether or not they wish to ratify the agreement, thereby forcing themselves to fulfill their own climate objectives. As soon as 55 countries, representing at least 55% of global greenhouse gas emissions, have given their second signature, the agreement will enter into force! The UN’s goal is to do this as soon as possible.

The progress can be tracked here (click on the image for an interactive map): 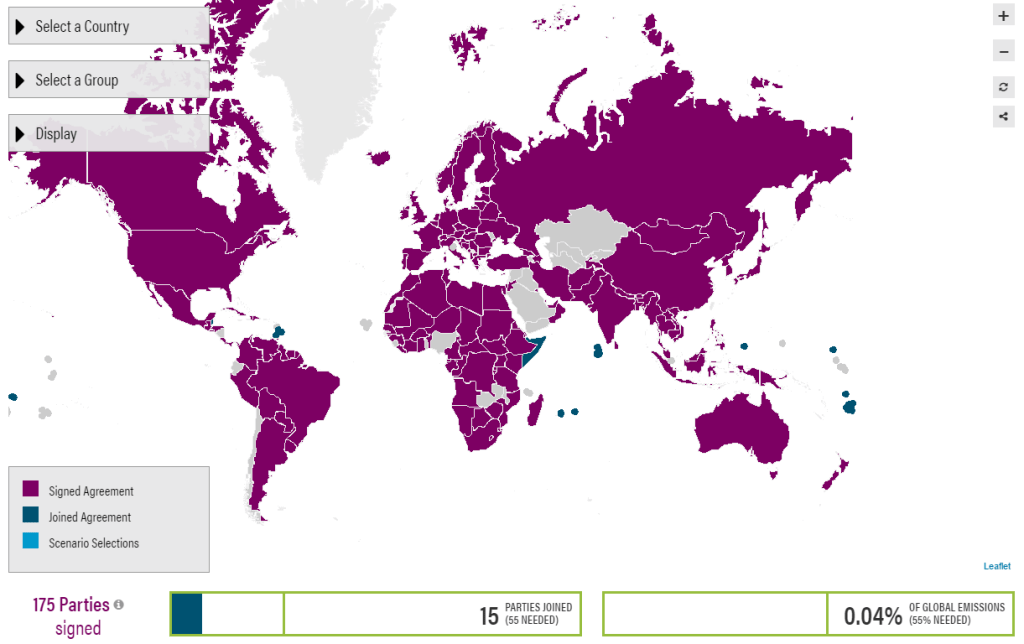 At the big signature event, Oscar-winning actor Leonardo DiCaprio was invited to give a speech:

I don’t need many words to explain it. When it comes down to climate change, we need each other as allies, or we will all lose. More than ever, we are interconnected, through the clothes we wear, the food we eat, the music we listen to, the energy we use and the websites we visit.  War no longer has a place in this world.

I know it may not feel like it when you watch the news, but the numbers do not lie. We are living in the most peaceful time of human history.

See you next week for the final update of the first series!