Last week I promised some good news; and good news it is.

Chances are that thinking about overpopulation gives you a headache, since you think population growth will get out of hand in the near future. This week it’s time to challenge that thought.

At the end of this week the Dutch population will hit a record of 17 million people. It has been 15 years since our last record of 16 million.
According to UN projections,
in what year will the Netherlands reach a population of 18 million inhabitants?

Try to think of a year and  Continue to see if you’re anywhere near the right answer.

The answer is Never. Very well done if you said that!

According to UN projections, the Netherlands will never reach the threshold of 18 million inhabitants. But since there is still some statistical uncertainty, there actually is no wrong answer to this question. For example, Statistics Netherlands (CBS) estimates that we will have 18 million inhabitants in the year 2034; not because of newborns, but as a result of immigrants and increased life expectancy.

This trend is seen globally.

Half of the world population already lives in countries with so-called sub-replacement fertility rates. Simply stated, this means that less children are born today than there are people dying, which leads to a shrinking population. And global fertility rates continue to drop with nations getting more developed. As a consequence, the world population is expected to stabilize at roughly 11 billion this century.

How is this possible? There are various reasons, but remember this:

So this week’s take-away: Overpopulation is a myth.
Now let’s start designing a sustainable future for 11 billion people.

The whole world population could fit in France.

Let’s do the math:

Not too bad is it?

At our population peak of 11 billion, we will only need to add an area the size of Italy. It is a ridiculous example, but illustrative. It’s a matter of perspective. Have a look at www.overpopulationisamyth.com for more great things!

Let’s step away from this example and look at the probabilistic projections of the United Nations. This is the expected population growth in the Netherlands: 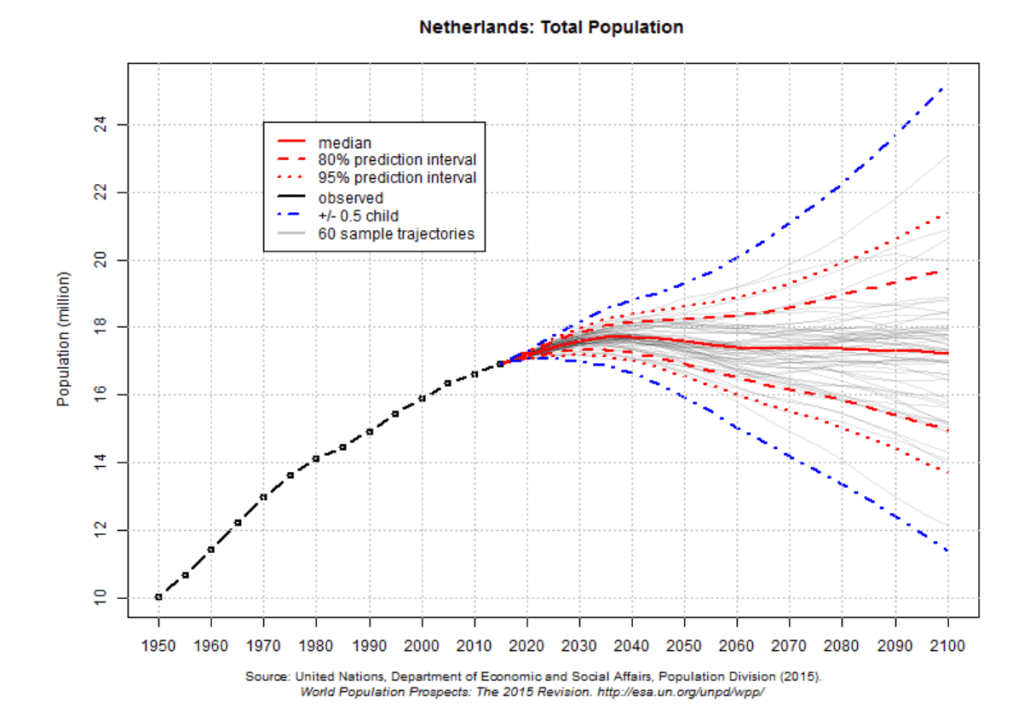 As you can see there is some statistical uncertainty but the trend is clear (solid red line). This is mainly caused by a stabilizing fertility rate as you can see in the following figure: 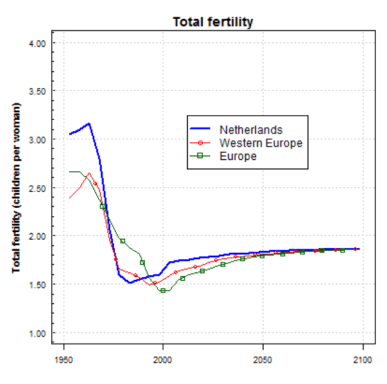 As said before, this drop in fertility rate in the Netherlands in the late 20th century is happening on a global scale:

Furthermore, if you want to better understand why the fertility rate is dropping globally, have a look at the video below with Hans Rosling. Hans Rosling is a Swedish professor who has managed to make statistics sexy. Using animated graphs and a lot of passion, he explains complex matters in a simple fashion, but what he does at the end is truly unbelievable.

Thanks for reading!
Please share the message and enlighten your friends.

Have a wonderful week!